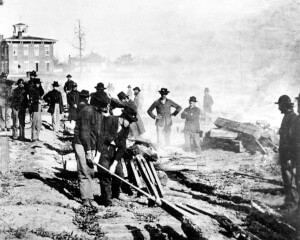 Georgia supplied 100,000 troops and 39 general to the Southern cause and suffered heavily because of casualties and Sherman’s March to the Sea.

The above picture describes Sherman’s neckties. Because of the limited manufacturing capacity of the South, the twisted rails could not be fixed. The sight of the twisted metal wrapped around trees and poles dotted the line of the march.  And these railroad loops were called ‘Sherman’s neckties’ or ‘Sherman’s hairpins.’

Our indoor museum at Georgia Veterans State Park has a display case dedicated to the Civil War. Inside the case we have this picture of Sherman’s ‘neckties’ used to explain the destruction of the Civil War throughout the country. We also have on display a .58 caliber Springfield Rifle which was standard issue during the Civil War. We display a cannon ball, a .54 caliber Burnside carbine, a bullet mild from the battle of Gettysburg (circa 1863), a Minie ball, a .54 caliber cavalry pistol, and Confederate swords and scabbards.

Georgia was relatively free from warfare until late 1863. A total of nearly 550 battles and skirmishes occurred within the state, with the majority occurring in the last two years of the conflict. The first major battle in Georgia was a Confederate victory at the Battle of Chickamauga in 1863, which was the last major Confederate victory in the west. In 1864 Union general William T. Sherman’s armies invaded Georgia as part of the Atlanta Campaign. Confederate general Joseph E. Johnston fought a series of battles, the largest being the Battle of Kennesaw Mountain, trying to delay Union armies for as long as possible as he retreated toward Atlanta. Johnston’s replacement, Gen. John Bell Hood, attempted several unsuccessful counterattacks at the Battle of Peachtree Creek and the Battle of Atlanta, but Sherman captured Atlanta on September 2, 1864

Sherman’s March was devastating to both Georgia and the Confederacy in terms of economics and psychology. Sherman himself estimated that the campaign had inflicted $100 million (about $1.4 billion in 2012 dollars) in damages, about one fifth of which “inured to our advantage” while the “remainder is simple waste and destruction.” His army wrecked 300 miles of railroad and numerous bridges and miles of telegraph lines. It seized 5,000 horses, 4,000 mules, and 13,000 head of cattle. It confiscated 9.5 million pounds of corn and 10.5 million pounds of fodder, and destroyed uncounted cotton gins and mills.